The American Kestrel is the smallest and most common falcon in North America. Unlike many other species of falcons, males and female kestrels have different plumages. 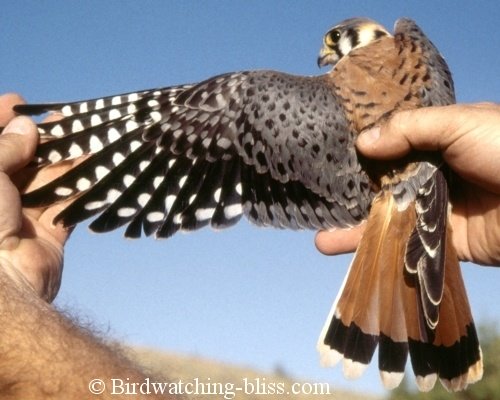 Males have blue/gray upper wings coverts and the wing tips are black with white spots. The back is rufous with bars. The lower back only is barred in adults (upper back clear), while the back is completely barred on juveniles. The tail color is variable, but most are reddish, with a wide sub-terminal black band. The tips of the tail is white.

As noted in the Falcon photos page, American Kestrels are reverse size dimorphic, meaning that the females are larger than the males. The dimorphism is not nearly as pronounced for Kestrels as it is for some other falcons and Accipiters, so there is more overlap in size (weight and wing measurements) between male and female American Kestrels.

Data below from A Photographic Guide to North American Raptors

Some wing and weight data that we have collected are presented below for American Kestrels.

Nice Closeup Video of an American Kestrel through Digiscoping:

Kestrels nest in cavities (cracks and crevices on cliffs or banks and holes in trees). They do not make their own cavities, but depend upon other birds (such as flickers or kingfishers) or natural processes for their nesting cavities. But you could help by building a Kestrel Nest Box: American Kestrel Nest Box Plans

American Kestrels are partially migratory. Some migrate South into Central America, while others spend the Winter in some very cold areas in the Northern U.S. and Southern Canada.

Kestrels can be seen on migration at some very well known Raptor migration sites such as Hawk Mountain (Pa), Cape May Point (NJ) and many other sites. They are among the first raptors to begin migration.

Longevity Record: 14 Years and 8 months; based upon an adult male American Kestrel captured in Utah in 1987 that was found dead in 2001 - data from USGS Bird Banding Lab (Klimkiewicz 2008)

Listen to the Call of an American Kestrel

Go to Raptor Migration - Learn where you can see 1000s of Kestrels during Fall Migration. 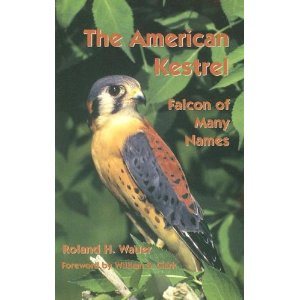 The American Kestrel: Falcon of Many Names