Bird Song - How Do Birds Sing? 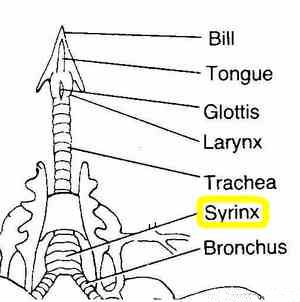 The voice-box of birds is not the larynx with its vocal cords, as in mammals, but the syrinx, a bony structure that is unique to birds. Birds have a larynx, but it lacks vocal chords.

In song birds, the syrinx is located at the lower end of the trachea, or windpipe, where the two bronchi join, surrounded by an air sac.

Specialized sets of syringeal muscles control the movement of the syrinx, including the tension on the membranes.

How do Birds Sing Different Songs? 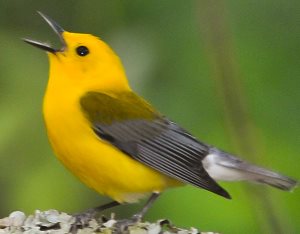 Just as different sounds are produced on a guitar by vibrating strings of varying length and tension, the bird uses different degrees of tension produced by the syringeal muscles to achieve variety in their song.

Birds can vary both the intensity (loudness) and frequency (pitch) of sounds by altering the air pressure passing from the lungs to the syrinx and by varying the tension exerted by the syringeal muscles on the membranes.

The Wood Thrush syrinx allows it to sing rising and falling notes at the same time during the trill at the end of its song. Listen for it...

A few species have no syrinx at all, such as vultures and some storks. You will never hear melodic singing coming from these birds!

In general, the more primitive birds have fewer syringeal muscles. Mimics and others that produce a wide variety of bird song sounds, like the crow, mockingbird, and starling have a greater number of syringeal muscles.

Why Do Birds Sing?

Male birds sing to attract and impress the ladies. They also sing to defend their territory. They sing to tell other males, "Bug off - this is mine."

My friend's grandfather also said that birds sing because they're happy. Unless there is a scientific study to prove otherwise, I'll agree.

I have always been impressed by the Winter Wren's song. Such a little guy belts out such a complex, long song. Take a deep breath...

How & Why Birds Sing

Photo of Prothonotary Warbler courtesy of Noel Pennington at Flickr.