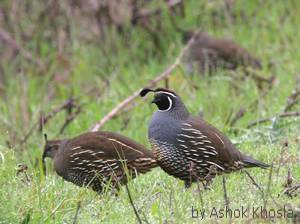 The California Quail, also known as the topknot quail or the valley quail are a widely distributed and prized game bird. It is known for its hardiness and adaptability.

The plump, gray-colored birds are smaller than a pigeon and the California Quail sports a downward curving black plume on top of its head and black bib with white stripe under the beak.

Flocks number from a few to 60 or more in the fall and winter months, but the form pairs in the spring to start the breeding season. They are common in neighborhoods where everyone is familiar with their "Chicago" call.

This is an excellent video showing Males calling and females watching over chicks as they forage and the female broods them when they stop to rest. Chicks can be seen when very small, then again when about half grown. A good example of California Quail living in a neighborhood.

The California Quail became the official California State Bird in 1931.