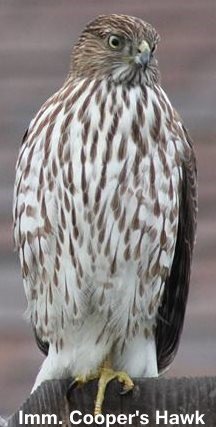 One of the most common questions we get about bird identification is: What hawk is this?

Both species are common visitors to bird feeders for obvious reasons.

Both birds look remarkably alike and have similar plumages as juveniles and as adults.

To further complicate matters, as noted in the Accipiters page, both Cooper's Hawks (COHA or "Coops") and Sharp-shinned Hawks (SSHA or sharpies) are reverse size dimorphic, meaning that the females are larger than the males. Side note: COHA and SSHA are the four-letter alpha codes as developed by the American Ornithologists' Union (AOU) as a short-hand method to record bird names for data collection, such as used in bird banding, bird surveys, etc..

If we rank them by size, SSHA males are the smallest and SSHA females are slightly larger.

COHA males are larger than SSHA females, but smaller than COHA females.

We previously presented data on wing chord and weight measurements we collected doing research on migrating raptors for both species at several locations in the Eastern and Western U.S. on our Sharp-shinned Hawk page and on the Cooper's Hawk page.

These data are summarized in Table 1 for both species. Since there are small size differences of both Accipiters in the West and East, data are presented separately. 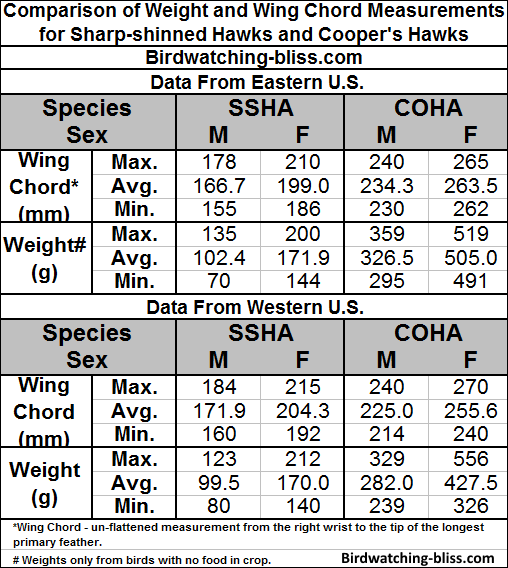 From Table 1 and Figure 2, you can see there is no over-lap is wing chord measurements between sex or species of SSHA or COHA in the Eastern U.S. 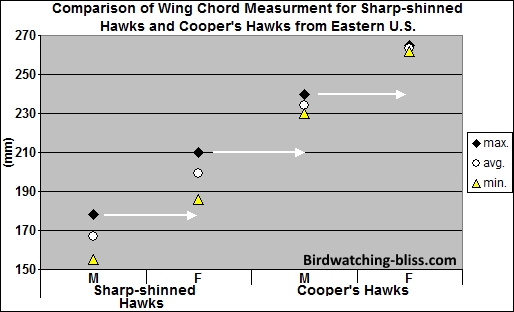 From Table 1 and Figure 3, you can also see that the bird's weights do not overlap between sex or species for birds with no food in the crop.

Keep in mind, birds with extremely large crops following recent meals or birds that are emaciated (starving) may actually weigh much more or less than normal. 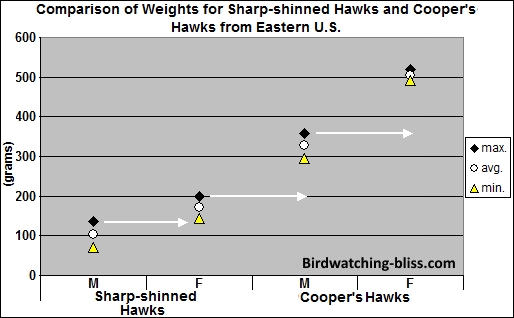 Figure 3. Comparison of Weights for Sharp-shinned Hawks and Cooper's Hawks from Eastern U.S.

We found a small amount of overlap in weight for Western Cooper's Hawks.

As previously mentioned, weights could be skewed if a bird had food in their crops or if birds were emaciated and not noted.

We also trapped one female Sharp-shinned Hawk with a wing chord of 215 mm that was larger than the smallest male Cooper's Hawk wing chord of 214 mm, but for all practical purposes, there is very little overlap in size or weight between the two species or between the sexes of each species.

Most beginning bird watchers seem to only notice colors and patterns, but the best way to identify a bird is to first know which group (family or genus) it belongs.

You can waste lots of time trying to identify a bird when you are looking at pages of falcons in your bird book when in fact, your bird is an Accipiter.

You must first decide if the bird is an Accipiter (bird hawk), a falcon, a Buteo (large soaring hawk) or something else like harriers, kites, eagles or vultures.

The best way to assign a bird to the correct group is to know their basic flight patterns and their basic silhouettes; both perched and flying).

Like all Accipiters, Sharp-shinned Hawks and Cooper's Hawks fly with a typical flap-flap-flap-glide pattern.

Obviously, they can flap many times in a row when chasing prey and they may not flap at all when they are gliding or soaring.

Falcons tend to flap more and glide less and the large bodied Buteos try to soar more and flap less.

For the time being, let's assume you know the bird you want to identify is an Accipiter, but you aren't sure if it is a Sharp-shinned Hawk or a Cooper's Hawk.

In flight, you may get a good, long look at a bird as it tries to gain altitude and soars in circles above your head or you may only get a short glimpse of a bird as it blasts by you trying to catch dinner.

But if you know what to look for, that may be all you need.

Figure 4 shows the flight silhouettes of a Sharp-shinned Hawk and a Cooper's Hawk.

Obviously, Cooper's hawks are larger, but that doesn't usually help unless we have spent many hours watching them. 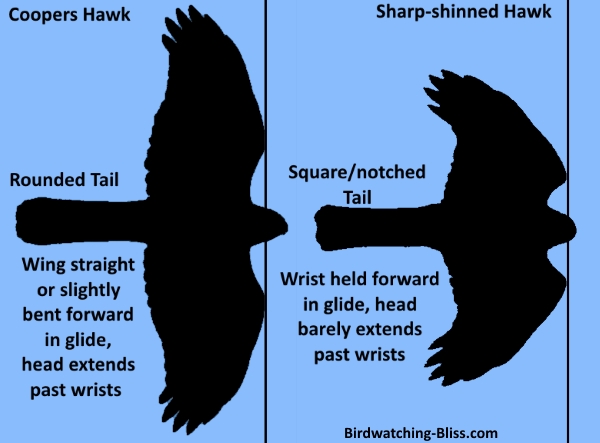 Look for a rounded tail or a square tail.

Remember this by thinking rounded like a "C" for Cooper's hawk. More on their tail characteristics later.

If you were to draw a straight line across the front of the wrists on the leading edge of the wings, coop's heads sticks out past that line and sharpie heads sometimes barely reach the line.

In the field (and in many bird books), these two species can look identical, but they have their differences.

If you get a good look at a perched bird or a good photograph, you can look for differences in their heads. Let's look first at birds in their immature or juvenile plumage (see Figure 5).

In their juvenile plumage, both species are brown on their upper parts and brownish streaks on their underparts.

The first thing I usually notice is whether the bird has a crown or not.

If the coop has it's hackles up at all, it will be very noticeable. Sharpies are smooth from the back of their heads down their necks.

Since Cooper's Hawks have larger heads, their eyes are smaller in relation to their heads and it is closer to the beak than to the back of the head.

Sharp-shinned Hawks on the other hand have small heads and their eye is in the center of their head.

Sharpies also tend to have a white superciliary stripe or streak over their eyes. Notice the eye color of juvenile Sharp-shinned Hawks and juvenile Cooper's hawks is pale or yellow.

Adults are blue-gray above and have reddish barring on their underparts.

As with the immature plumage, the size and position of the eye is the same (see Figure 6), but the blackish cap on the Cooper's hawk usually stands out, especially since the nape of the neck is a paler color.

In contrast, the head of the Sharp-shinned Hawk is the same color as the nape of the neck.

Notice the eye color of adult Accipiters is orange or red.

Earlier, I mentioned the tails of Cooper's Hawks are rounded (like a "C") and tails of sharpies are more square, but there are more differences as shown in Figure 7. 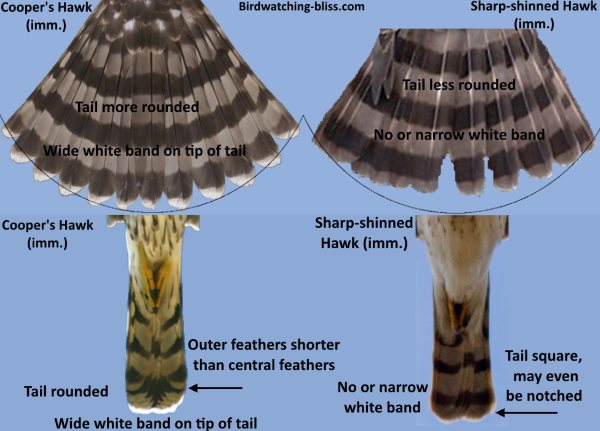 Notice in Figure 7 how round the Cooper's Hawk tail is compared to the Sharp-shinned Hawk.

I deliberately scaled these tails to be the same size and used the same portion of a circle to compare them (top portion of Figure 7.

Also notice that there is a wide white band (lower portion of Figure 7) on the tails of fresh juvenile Cooper's Hawk tail feathers.

This band may be worn off by Spring before the feathers are molted. Also notice the white arrows point to the tip of the outer tail feathers.

Following are photos of Cooper's Hawks and Sharp-shinned hawks submitted by visitors inquiring about identification.

Paul Martin (Kansas) sent the following two pictures to us.

We have labeled them with the main characters for identification that we can see.

The first is an adult Cooper's Hawk. 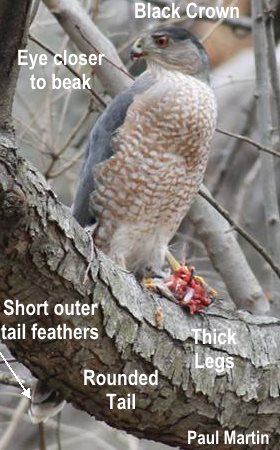 We can tell it is an adult because of the blue-gray color on the upper parts and the reddish barring on the under parts.

We can identify it as a Cooper’s Hawk because of the blackish crown, the eye is closer to the beak than the center of the head and the tail is rounded because we can see how short the outer tail feathers are in comparison to the central tail feathers.

We can also see the bird has stout legs and not the "stick-like" legs of a Sharp-shinned Hawk.

The second picture is an immature (juvenile) Cooper's Hawk. 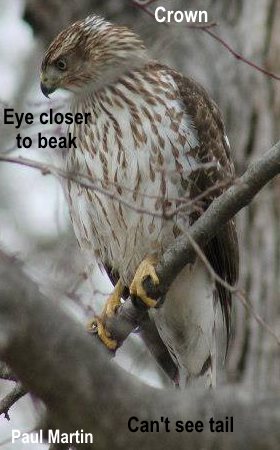 We can identify this bird as an immature or juvenile because it has brown upper parts and brownish streaks on the underparts.

We can't see the tail on this bird, but we can see a distinct crown and that the eye is closer to the beak.

Use the identification strategies we have discussed to ID the bird in the video below as a Cooper's Hawk.

William Burliss (Mass.) sent the next picture. Again, we can tell it is an adult because of the blue-gray color on the upper parts and the reddish barring on the under parts.

We can identify this bird as a Sharp-shinned Hawk mainly because we can see the square tail. 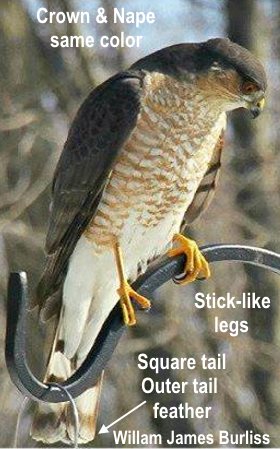 Though we are viewing the bird from the side and not from the back, we can still see the top of the head and the nape are the same color.

Because the bird's head is tilted away from the camera, the eye appears to be closer to the beak, so we can't use that as a good identification character. But we can see the birds "stick-like" legs.

We've added a fourth picture we took during field work of an immature Sharp-shinned Hawk. 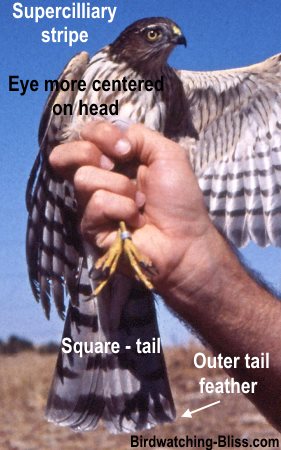 Again, we can identify this bird as a Sharp-shinned Hawk mainly because we can see the square tail and how the outer tail feather is almost as long as the central tail feathers.

We can also see the eye is closer to the center of the head, but again the angle doesn't show that character as well as we would like. But the supercilliary streak is a good sharpie character.

Use the identification strategies we have discussed to ID the bird in the video below as a Sharp-shinned Hawk.

With practice, you will start noticing the differences between these two species.