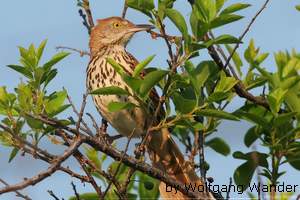 The Brown Thrasher is commonly found in the eastern section of the United States, ranging north to Canada and west to the Rockies. They migrate North in the Summer and spends the Winter in the Southern states.

Brown Thrashers are fairly large birds that sing loudly, but may be hard to see clearly as they tend to stay in thick cover such as shrubs and thickets.

Brown Thrashers mimic the songs of other birds. One theory proposes that it takes a male with lots of experience to learn many songs and a large repertoire of songs empresses the females. See how many different bird songs and calls you can recognize.

This Brown Thrasher is obviously nesting in a shurb in a neighorhood.

On April 6, 1935, the Brown Thrasher was first chosen as the Georgia state bird by official proclamation of the Governor. In 1970, at the request of the Garden Clubs of Georgia, it was designated by the Legislature as the official state bird.