Golden Eagles are found throughout mountainous regions of North America, Europe, Asia and North Africa and the taiga forests of Canada.

Golden Eagles are reverse size dimorphic, meaning that the females are larger than the males.

Above data from A Photographic Guide to North American Raptors

, Wheeler & Clark 1995. We highly recommend this book for anyone interested in raptors.

Golden Eagle: Sovereign of the Skies

Golden Eagles are named for the golden or tawny-buff colored head and neck feathers found on the adults.

Juvenile Golden Eagles are a much darker brown on the head and body, but are easily identified by the wide white band at the base of the tail. Juveniles also have a white wrist patch that can be seen for several years. The young birds molt into adult plumage when they are three to four years old.

Beginning Hawkwatchers often confuse adult Golden Eagles with juvenile Bald Eagles and Turkey Vultures, but with experience, learn to recognize the differences by wing and body proportions and by wing beat. Some field guides incorrectly use the exact same silhouette for Bald and Golden Eagles. 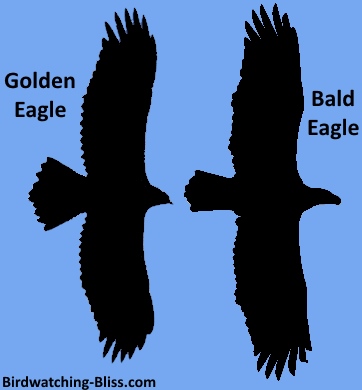 In the photo (actual photos of eagles blacked out for illustration), you can see the silhouettes are different with more of the bald eagle's neck and head in front of the wings.

To me, this difference seems even more exaggerated when the birds are flapping. Bald eagles also have longer wings in proportion to their bodies than Golden Eagles.

In the field, both Golden Eagles and juvenile Bald Eagles appear to have black beaks, while adult Bald Egles have yellow beaks. But the beak of a bald eagle is much heavier and thicker from top to bottom than Golden Eagles (see photo below). 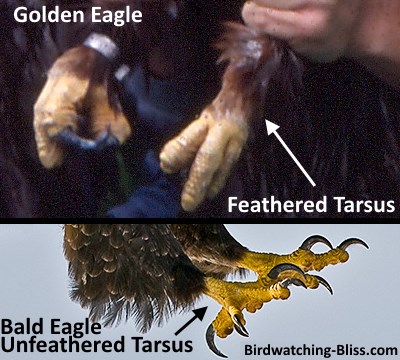 All Golden Eagles have feathered tarsi, meaning the section of their foot from the ankle to the toes (tarsus) are covered in feathers (see upper part of photo).

Also notice the band placed on the eagle's right leg had to go over the leg feathers.

Because of this, Golden Eagles are sometimes referred to as "booted eagles".

The tarsus of a Bald Eagle is unfeathered and has yellow scales instead of feathers, like a chicken leg (see lower part of photo).

The fact that they looks so similar in their characteristics, but come from different parts of the bird of prey family tree is a good example of convergent evolution, where the best solutions (wing and body size, beak, talons) to similar flying and feeding requirements have evolved independently, but are remarkably similar.

Which Eagle is on U.S. Coins?

Most of us assume the eagle on the back of the U.S. Quarter must be a Bald Eagle because the Bald Eagle is one of the U.S. National Symbols. But when the quarter was first minted in 1932 in honor of the Washington Bicentenial, some people were not sure. The New York Times cunsulted an "eagle expert" who concluded it was a Bald Eagle. Look for yourself. Look closely at the eagle's legs to see if they are bare or covered by feathers. To me, they appear to be partially bare above the foot (at extreme magnification), but I can see why some think the tarsi are feathered. To me, this indicates the model was a bald eagle. But there is no doubt the heavy beak belongs to a Bald Eagle and not a Golden Eagle.

Here are two other examples of U.S. coins that depict Bald Eagles. Examples:

More Information about Eagles and Other Raptors:

Back to All Eagle photos