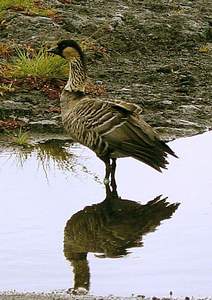 The Nene or Hawaiian Goose is the rarest State Bird and was listed as an endangered species in 1967 under the Federal Endangered Species Act. In 1951, the wild population was estimated at only 30 birds with 13 more in captivity.

Conservation, which has mainly been captive breeding and trying to protect wild nests from predators has increased the numbers to about 2,500 Nene in the wild today. Approximately 500 Nene live on the big island, 400 on Maui, 8,100 on Molokai and 1,500 on Kauai.

The Nene population crashed between 1850 and 1900 due to overhunting and egg collecting. Today, the Nene is still threatened by the introduced mongooses and by dogs, cats and wild pigs which eat the Nene’s eggs and/or kill the young goslings. The Nene is doing well on the island of Kauai because the mongoose was never introduced there.

Recent DNA analysis shows the Nene evolved from the Canada Goose (Branta canadensis)that arrived in the Hawaiian Islands about 500,000 years ago.

Female Nene with two small young. You can see why the young are so vulnerable to introduced predators.

The Nene, or Hawaiian Goose became the Hawaii State Bird in 1957. Since Hawaii did not officially become a state until 1959, I question the validity of that date. Pehaps it was chosen as a territorial bird then. The official Hawaii govt. website has almost no information about the state bird or the history of how or why the Nene was chosen as the State Bird. The State of Hawaii website claims to have a teacher's guide about the state bird, but the link is broken.