Below you'll find some facinating facts about hummingbird migration:

First things first. Hummingbirds do not ride on the backs of 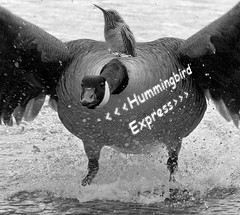 geese. We understand why caveman may have believed this (with all due respect to cavemen), but why does this myth still persist today?

Just think of the implications:

Now that's all cleared up, here are some facts:

It's quite amazing, but hummingbirds do migrate by themselves, under their own power, and as solitary migrants, not in flocks.

Hummingbirds migrate because it is an innate, genetic instinct. Factors such as weather, length of daylight, & fat accumulation stimulate migration.

Migration routes and timing vary from species to species and even population to population. Most of the more than 300 hummingbird species living in the tropics do not migrate because of the constant warm temperatures and abundant food supplies.

But most of the species that breed north of Mexico in the U.S. & Canada do migrate to separate wintering grounds. There are some exceptions of populations that remain along the Pacific Coast and the Mexican border where conditions are suitable year-round.

Rufous Hummingbirds (Selasphorus rufus) make the longest migration of any of the Trochilidae (Hummingbird Family) and, in proportion to size, one of the longest bird migrations.

It breeds as far north as Alaska and winters in Central America, a distance of ~2700 miles. This is is equivalent to 49,000,000 body lengths. This is the longest migration of any bird in terms of body length.

Many Ruby-throated Hummingbirds travel more than 2,000 miles to go from Panama to their breeding destination in Canada. People wondered how the Ruby-throat could cross the Gulf of Mexico without stopping to refuel, a minimum trip of ~500 miles (the shortest distance across the Gulf).

To answer this question, R.C. Lasiewski conducted a study in 1962, The energetics of migrating hummingbirds (Condor 64:324). As a result of his experiments with hovering hummingbirds in metabolic chambers, Lasiewski concluded that a male Ruby-throated hummingbird, weighing about 4.5 g, of which 2 g was fat, could fly nonstop for 26 hours, consuming the fat at the rate of 0.69 calories per hour.

In a more recent study, Calder and Jones (1989) using arrival and departure masses and rates of gain from Rufous Hummingbird banding data, determined that a 747 mile (1,202 km) flight of a Rufous appears to have been possible. At an airspeed of 43 km/h, the Rufous was able to travel 747 miles in 28 hours or two 373-mi (601 km) legs in 14-hour days apiece, depending on unknowns of tailwinds & successful refueling points.

Therefore, on its 2,700-mile journey from Mexico to Alaska, a Rufous Hummingbird will stop at least 4 times to refuel.

According to Bill Calder, a University of Arizona hummingbird expert, it takes about a week for a migrating hummingbird to replace the protein and fat metabolized on a completed flight segment.

So for the Rufous that makes at least 4 refueling stops from Mexico to Alaska, their journey may take anywhere from 4-8 weeks. Refueling stops may even be longer than 2 weeks, depending on weather, headwinds, and nectar availability.

is closely tied to the flowering seasons of their major nectar sources. In temperate latitudes, this corresponds to the northern and southern springs when flowering plants begin to bloom.

The rigors of hummingbird migration coupled with high metabolic rates requires these tiny birds to refuel often when traveling to their breeding grounds. So when they stumble upon your feeder along the way, it's like they've landed at the all-you-can-eat buffet, for free! (unless there's aggressive competition).

In addition, nectar corridors, or migration routes abundant with flowering resources, are vital to hummingbird survival. Tens of thousands of hummingbirds migrate through these corridors on their way north & south to refuel.

How Long Does It Take For a Hummingbird to Migrate?

Jouko Asked: What is the approximate total time spent in Spring migration by a ruby-throated hummingbird from Southern Mexico to Bruce Peninsula, Ontario? Assuming 3323km (2065mi) "as-the-crow-flies" total distance - and, I presume, including the famous 800km +/- nonstop across Gulf of Mexico. Somewhere I read they spend one week before and after for fattening, to get in shape for long distance travel.

Answer: Your question is a good one and will be difficult to answer. This is more than a just Master's degree question, this is a PhD project!

What speed at which hummingbirds are capable of migrating and what they actually do is dependent upon many things.

Spring migration is triggered by hormonal changes triggered by increasing day length, but weather fronts have a big effect on their migration. They may be capable of flying several hundred miles, but have to wait because of cold fronts, snow events and the progress of flowering plants and insects they need for food. No point in getting up north quickly only to die because of cold and lack of flowers.

Insects? Yes, we have seen hummingbirds steal insect carcasses from spider webs. Yes, they eat lots of nectar for energy, but also must have protein. Also, not all birds migrate the same distance or at the same time. On other species of banded birds, there seems to be a "hop-over" effect.

It is more difficult to get data on individual hummingbirds because they are so small, that there are very few that are actually banded and the technology for transmitters is very limited. 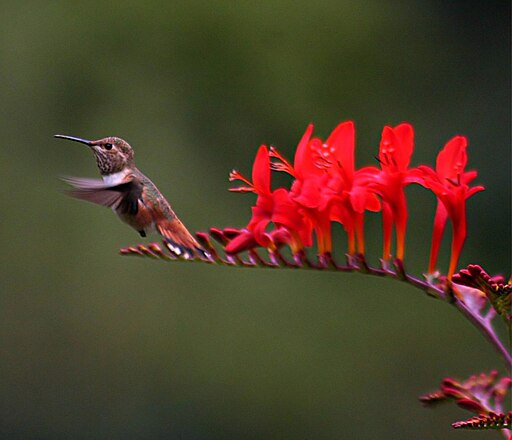 Future technology will allow transmitters or RFD chips on hummingbirds. I have seen where someone has started tracking monarch butterflies. Good news, even if they could only read the signal a mile away or so.

The first migration map link below shows 1st sightings. You can get an idea of what they were able to do this Spring.

They were first spotted in the south in late February and first arrived in your area in Early May. According to that data, it seems that it takes them 60-70 days to make the trip from the Southern U.S. Since there is no data from Mexico, we could only guess that it may take another week or so, but we really don't know where your hummingbirds spend the winter.

The second migration map shows all sightings by certain dates. You can see that while some birds are arriving in your area, there are many birds still down south. Some of those may still be moving north, but most will probably stay in the south to breed.

From the abstract of this scientific paper about migrant hummingbirds, they took from a few days up to 3 weeks to refuel.

Amazing little birds no doubt. Imaging a bird weighing less 4 grams when empty being able to fly from Mexico to Canada and doing it for many years.

The Bird Banding Lab (BBL) reports the longest time between banding and recapture for Ruby-throated humming birds as 9 years.

You can use these links to report your hummingbird migration observations as well as see other reports as the migration moves across the U.S. and into Canada.

More Tips and Info about Hummingbirds: