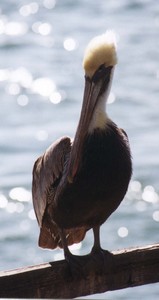 The Brown Pelican is once again a common bird in the U.S. and can be seen fishing along the Atlantic Coast, the Gulf Coast and the California coast. But that was not always true. Pelicans were slaughtered and their nests were destroyed because they ate fish and were thought to compete with commercial fishing. But that was not the main problem.

A pesticide called DDT was getting into the environment and was concentrating in fish. Birds that ate fish (and birds that preyed upon other birds that ate fish) were contaminated. The chemical caused them to lay eggs with shells so thin that the eggs broke while they were being incubated. By the 1960s Brown Pelicans were rare along the Gulf Coast (Including Louisiana) and in Southern California.

An Excellent segment from the BBC showing pelicans catching fish in slow motion.

Notice that one chick is much bigger than the other. This is because their eggs hatch asynchronously, so the first egg layed hatches first. The larger chick may only be two or three days older, but they grow so fast it makes a big difference. Also notice the chicks are hot and they are "gular fluttering" to cool off.