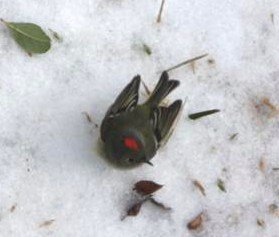 Q: I took this photo in Dallas, Texas. It was about 3 inches long. It appeared to hover when looking for food.

There was a bright red spot on top of its head. Belly was white, but the back had some yellowish green on gray. The beak was very small. Thank you. -Kelly 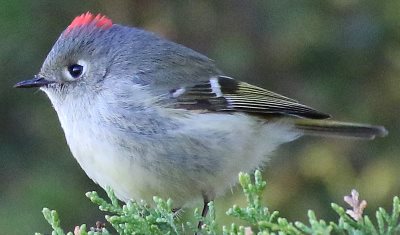 A: Kelly, this is a male ruby-crowned kinglet Regulus calendula of the gnatcatcher and kinglet family, Sylviidae.

Hidden Crown Patch
Now You See It, Now You Don't!

The male's have the red crown patch which ironically is seldom visible (unless you catch the male displaying), but you just happen to get a great shot of it.

They also have obvious white wing bars, are olive-gray in color and have a broken white eye-ring.

Ruby-crowned kinglets spend the winters in Texas as well as other parts of southern half of the United States and Mexico.

A large part of their summer breeding range exists in Canada.

Golden-crowned kinglets also spend the winter in your area, but the males have an orange crown patch, the females have a yellow one which are both bordered by a heavy black line underneath and have a dull white eyebrow stripe instead of the broken eye-ring.

Kinglets tend to move around fast, flit their wings upward and, as you mentioned, will sometimes "hover" looking for food such as insects.

Kelly: Thank you for your fast response. I travel a lot for my job and constantly seeing birds that I don't recognize. This website will come in handy. Thank you again!

Jack Kidd: When I became a bird watcher many years ago, there was a golf course near my house and a friend and I would go "bird hiking" since we both were birders. I can remember the first time I ever saw a male ruby crowned kinglet.

We were both sitting down resting and suddenly this very small bird came down very close to where we were sitting, he eyed us closely but hopped from limb to limb just out of our arms length. He stayed for several minutes then flew away.

For all the birding I have done over the years that is the closest a bird came to me. I was later told by a well known naturalist in Austin Dr. Roy Bedichek, that that was common for such action I described to him about the ruby-crowned kinglet.