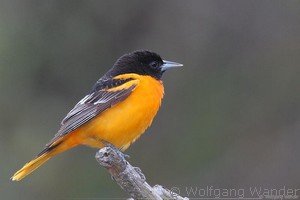 The Baltimore Oriole is a brightly colored bird that is hard to miss. The male has a bright orange belly and under parts with a black head and back. He also has black wings with showy white wing bars. And from behind, he also has an orange rump.

The female also has an orange belly, but it is not as bright. She has a gray head and wings instead of black.

Orioles fly South in the Winter and Return North to breed in the Spring, where they weave elaborate hanging basket nests.

Baltimore Orioles breed in Eastern and Central U.S. and Canada and a very similar species/subspecies; Bullock's Orioles breed in Western and Central the Western states and provinces. Where they meet in the middle, they can hybridize. At one time, scientists said that meant there was only one species and changed both species names to Northern Oriole. New DNA evidence shows they don't hybridize as much as previously thought, so both original names have been restored and the current thinking is they are two separate species.

Watch bothe the male and female Baltimore Oriole feed chicks in the nest.

Watch the female weave the nest.

The Baltimore Oriole has been the Maryland State Bird since 1947. In 1894, Baltimore's major league baseball team was named after the State Bird.