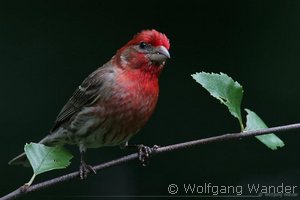 Purple Finches are common breeding birds of Northern evergreen forests that Roger Tory Peterson says look like a "sparrow dipped in raspberry juice. They leave the coldest areas during the Winter to search for food (conifer seeds - "pine cones") and Winter along the West Coast and from the Central and Southern U.S. up to the North East.

It appears they are being replaced in the East by the House Finch which was introduced from Western North America to New York City about 1950.