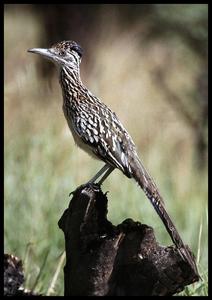 The Greater Roadrunner is an iconic bird of the Southwest Deserts, but they are also found in shrubby habitats across the Southern Great Plains East to the Mississippi River. Roadrunners are easily to identify as they run around on the ground looking for prey.

Since birds originated from dinosaurs, it is not hard to imagine the first birds probably moved a lot like a roadrunner before birds evolve the ability for sustained flight.

They spend most of their time running on the ground, but they can fly when they want or need to. They are very fast and agile and prey on a variety of snakes, lizards and small birds (see videos below).

Listen and watch carefully to hear and see chicks bill rattle (It happens fast). Then watch a chick leave the nest in a low catcus.

Sorry about the dramatic music and the hollywood editing. We would prefer natural sounds and unedited behavior, but we show this video so you can understand that the roadrunner is a serious predator. Real nature is exciting enough.

The chaparral bird, commonly called roadrunner, was adopted as the official New Mexico State Bird in 1949.