It's a Shame These Birds Had To Die. Even a Tiny Piece of String Can Kill.

Plastic trash and other man-made debris in our oceans affects 44% of all seabird species. Birds get entangled in fishing line, choked by 6-pack rings and die from ingesting plastics mistaking it for food. And that's just the start of it. 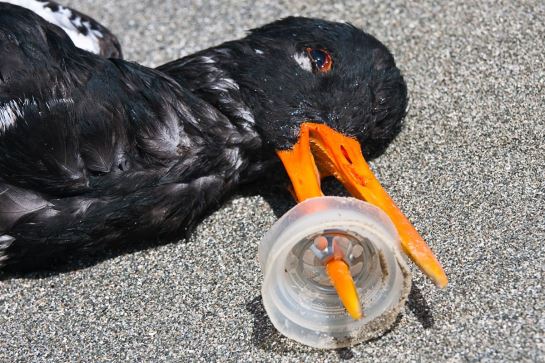 Oystercatcher died from starvation due to a plastic cap.
Peregrine's Bird Blog

What Can We Do? 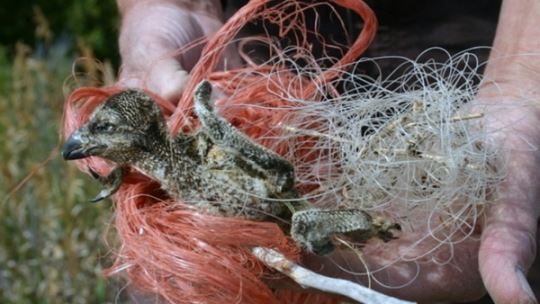 As usual, reduce, reuse and recycle will always help. But what else?

If you fish, I won't tell you to pick

up your fishing line, nets and hooks because if you are reading this, you're probably not the problem - I hope.

Then there are some people who are just a waste of life and they just don't and won't ever care about littering, among other things.

Then their are people who just are uninformed. They just need to be educated and have things brought to their attention. So it would help if every time you are out fishing or on the boat with friends, make an effort to show people what they should do.

Have a designated trash bin on board and make it known that trash of any sort is definitely not to be thrown overboard. People don't think it's a big deal to throw a wrapper or a cigarette butt overboard until they are walking along a shore covered in it.

The California Division of Boating and Waterways and the California Coastal Commission's Boating Clean and Green Program have designated containers for recycling monofilament fishing line which otherwise is not biodegradeable and can remain in the environment over 600 years. If you live near a popular fishing location, maybe you can propose to your local agencies a similar program.

The EPA Marine Debris Prevention Program has a handy, "What You Can Do" at home, on the go, at the office, at school, at sea, during events and what you can do as a beachfront property manager to prevent marine debris.

Some people just don't realize how their little piece trash can mean life or death for wildlife such as this... 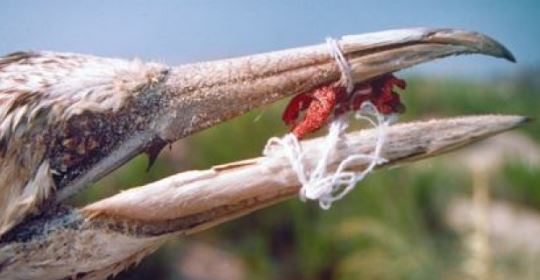 Even a seemingly harmless piece of string that's tossed away by the uninformed can be deadly.
University of Georgia Marine Extension Service

Figure: Consumer and industrial plastic ingested by beached fulmars in the North Sea 1980s-2008. Since the 1980s the average mass of industrial plastic found has been halved. The intake of consumer plastic tripled in the mid 1990s, but has decreased since. Source: United Nations Environment Programme (UNEP) Year Book Emerging Issues in Our Global Environment 2011.

At the very least...

Tell everyone you know to cut up those 6-pack rings before throwing them away. And not just the big circles but the little ones in between two so there is not one complete circle left. Not everyone will volunteer a weekend to clean-up a beach, but I'm hoping we can take 2 minutes to cut up a 6-pack ring. If not, then were all just doomed. 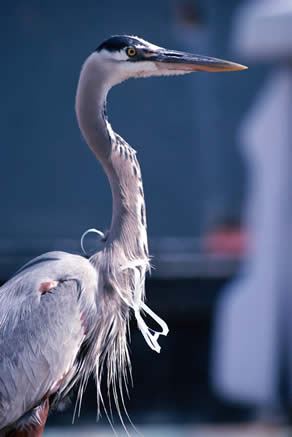 Despite efforts to remove the 6-pack rings, this great blue heron drowned soon after this photo was taken.

Warning: The following video is a little hard to watch, but it's reality. The footage was taken on Midway Island in the North Pacific Ocean. The island is  1,200 miles away from any other coast line and is only inhabited by birds yet trash is everywhere - along the shoreline and in birds' stomachs.

Marine debris is everyone's problem. Be the change you seek.