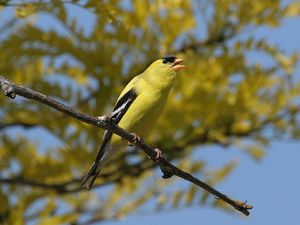 The American Goldfinch is the State Bird of three states: Iowa, New Jersey and Washington.

The American Goldfinch is a delicate little bird and the males have a striking yellow body, black wings and a black cap. Many times they can be heard as they fly overhead in small flocks. When they fly, they appear to be bouncing and almost always seem to use the "potato chip" call as they communitcate with other members of the group.

In 1933 the Iowa Legislature declared the Eastern Goldfinch the official Iowa state bird. It was chosen because it is commonly seen in Iowa and often stays through the winter.

New Jersey named the "Eastern Goldfinch" as the official State bird in 1913.

In 1928, legislators let school children select the state bird and the meadowlark won hands-down. It was a nice choice but seven other states already had chosen the same bird.

A new vote was taken in 1931 by the Washington Federation of Women's Clubs. Many birds were nominated, but the goldfinch won out over the tanager, Song Sparrow, junco and Pileated Woodpecker. Two other States had already selected American Goldfinch as their State Bird, so the State Legislature decided to leave the final choice to school children. In 1951, children voted for the goldfinch and the Legislature made it unanimous, the "Willow Goldfinch" as they called it, was the official Washington State Bird.

More information about the The American Goldfinch, its life history, song and identification can be found here.