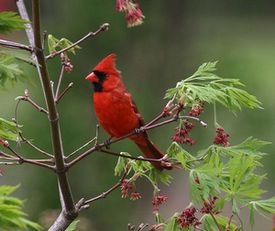 An interesting fact is, unlike most North American songbirds, both male and female Cardinals sing.

Also, both male and female birds will fiercely defend their breeding territory, which you may have witnessed as odd behavior. If they see their reflection in a window or mirror (as on a car rearview mirror or a metal bumper) they will attack the object, believing that their reflection is another Cardinal intruding into their territory.

The Northern Cardinal is sometimes called the Winter Redbird because it is most noticeable during the winter when it is the only "redbird" present.

In 1928, Illinois school children selected the cardinal as the State Bird of Illinois. The General Assembly made that designation official in 1929.

The cardinal was adopted as the State Bird of Indiana by the 1933 General Assembly (Indiana Code 1-2-8).

The Northern Cardinal was adopted as the official Virginia State Bird on January 25, 1950.

The cardinal was made the official West Virginia State Bird by House Concurrent Resolution No. 12, adopted by the Legislature on March 7, 1949, authorizing a vote by pupils of public schools and civic organizations.

More information about the Northern Cardinal, its life history, song, identification can be found here.