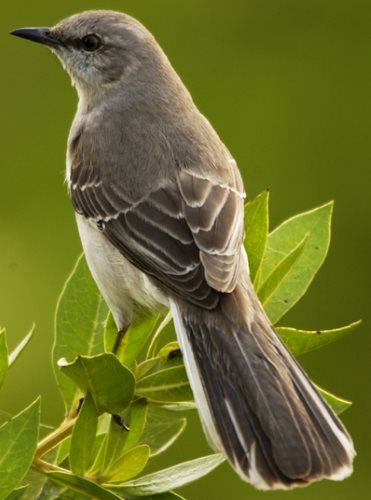 Mockingbirds are considered one of America's favorite backyard birds. Perhaps that is why five states have chosen the Northern Mockingbird (Mimus polyglottos) as its state bird: Arkansas, Florida, Mississippi, Texas and Tennessee.

The Northern Mockingbird is known for imitating or "mocking" the songs of other birds. Its Latin name means "mimic of many tongues."

In the video below, a Northern Mockingbird imitates the songs and calls of Great-tailed Grackles, Cardinals and Cactus Wrens.

At the 2:50 mark, it imitates a car alarm and at 10:21, it makes the sound a Mourning Dove's wings makes when taking off.

The Northern Mockingbird was adopted as the Arkansas State Bird by the General Assembly of 1929.

Senate Concurrent Resolution No. 3 of the 1927 legislative session designated the Mockingbird as the state bird.

The Mockingbird was selected as the official State Bird by the Women's Federated Clubs and by the State Legislature in 1944.

According to the Nashville Banner of April 16, 1933, the mockingbird was selected on April 11, 1933 as the Tennessee State Bird in an election conducted by the Tennessee Ornithological Society. The choice was confirmed by Senate Joint Resolution 51 adopted by the General Assembly in 1933.

More information about the Northern Mockingbird, its life history, song, identification can be found here.