Q: What species is this? Photographed in League City, Texas in early February after eating a sparrow on my suburban fence near a bird feeder. -Darren

A: This is a Cooper's Hawk (Accipiter cooperii), of the Accipiter subfamily, Accipitrinae.

Cooper's Hawks are about the size of a crow, from 14-20" in size, the females are typically larger than the males.

The only other bird this can be confused with is a Sharp-shinned Hawk, but they are smaller, more like a big American Robin in size.

The head of a Cooper's Hawk will also appear to be flattened on top and they have sort of a "mean" look to them made from the superorbital ridge above the eye.

Based on the comparative size of fencing and the larger looking head of the bird in your photo, we believe it is a Coop rather than a Sharpy.

Colors are hard to see in photos, but the white spots and brownish coloring instead of slate-gray adult plumage on the back of the bird would indicate a juvenile or second year bird.

The eye color looks more yellowish than orange or red which also is a juvenile characteristic.

The breast feathers appear to be orange in color which is more of an adult characteristic.

Juveniles will have brown streaks on the breast whereas adults will have rusty barring.

This is why we think this bird is in its second year rather than first, which makes sense since it was February when you took the photo.

As you witnessed, these birds prey on small birds and often bird feeding stations present an opportunistic advantage to them. 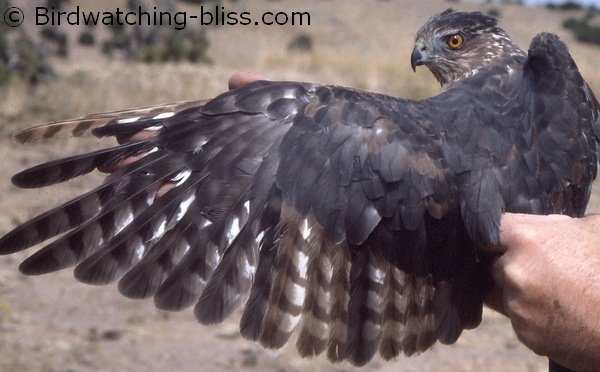 Here is some good close-up footage of an adult Cooper's Hawk:

Thanks for your ID. I thought it might be a Roadside Hawk a bit north of it's range due to the yellow eyes and cere. I should mention this bird was big; about the size of a very large crow (or bigger).

Because of its size, I think we could eliminate a Roadside Hawk which are much smaller (12-16"). Based on your guess on size, this bird is probably a female Cooper's Hawk. Young Cooper's Hawks can have yellowish eye color and cere color may vary from yellow to pale gray depending on diet. Though not in their normal range, Roadside Hawks have been sighted in Texas and should be considered a possibility when identifying an accipiter.