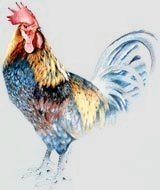 Adopted on April 14, 1939, the Blue Hen chicken had long been used as a motif in Delaware for numerous political campaigns and publications and is the mascot for the University of Delaware's sports teams.

History: During the Revolutionary War, on December 9, 1775, the Continental Congress resolved that a military battalion was to be raised from the lower three counties along the Delaware River. Thus, the Delaware regiment was born- a group composed of eight companies representing New Castle, Kent and Sussex counties.

The second company was composed of men from Kent County and was under the command of Capt. John Caldwell, who was an avid fan and owner of gamecocks. The troops often amused themselves by staging cock fights with a breed known as the Kent County Blue Hen, recognizable for its blue plumage.

The renown of these chickens spread rapidly during the time when cock fighting was a popular form of amusement, and the "Blue Hens' Chickens" developed quite a reputation for ferocity and fighting success.

Capt. Caldwell's company likewise acquired a considerable reputation for its own fighting prowess, in engagements with the British at Long Island, White Plains, Trenton and Princeton, and soon it was nicknamed "Caldwell's Gamecocks."

Capt. Caldwell's company was part of Col. John Haslet's first Delaware regiment that reported for duty near the outset of the Revolutionary War in January, 1776. In August, 1781, remnants of the regiment were still battling at Eutaw Springs, S.C.

Although often referred to as "The Fighting Delawares," Haslet's regiment also won the nickname, "The Blue Hens' Chickens," and that name was formally adopted by the Delaware General Assembly in 1939 when the Blue Hen Chicken was named the official Delaware state bird.

The Delaware State Bird and all domesticated chickens are descendants of the Red Junglefowl, which is native to the jungles of India and other parts of Southern Asia. Different breeds of chickens have spread all over the world after people domesticated the chicken.

Delaware, Rhode Island and South Dakota are the only three U.S. States that have selected non-native birds as Official State Birds.