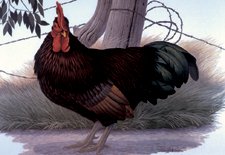 Origin: Developed in the New England states of Massachusetts and Rhode Island, early flocks often had both single and rose combed individuals because of the influence of Malay blood. It was from the Malay that the Rhode Island Red got its deep color, strong constitution and relatively hard feathers.

Use: A dual purpose medium heavy fowl; used more for egg production than meat production because of its dark colored pin feathers and its ability to lay brown eggs at a high rate.

They can be very tame around people, but can be aggresive to other chickens in the flock.

Rhode Island, Delaware and South Dakota are the only three U.S. States that have selected non-native birds as the Official State Bird.